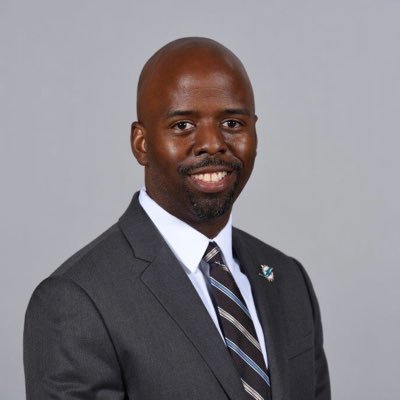 SpecialitySenior Vice President, Communications and Community Affairs, Miami Dolphins
BiographyJason Jenkins is in his eleventh season with the Miami Dolphins and was named Senior Vice President of Communications and Community Affairs in January 2015. Jenkins oversees the organization’s front-facing brands, including media outreach, public relations, digital and social media and community efforts. Jenkins previously served as the team’s Vice President of Communications, being named to that position in May 2013. Prior to joining the Dolphins, Jenkins worked in the media relations department for the San Francisco 49ers, as well as served as the Associate Athletic Director at Texas Southern University from 1999-2002 and as Athletic Sales and Promotion Manager and Sports Communications Assistant at Lehigh University from 1997-99. A native of Houston, Jenkins earned his bachelor’s degree in 1997 in broadcast journalism from Texas Tech University. In 2017, Jenkins was selected by faculty and alumni as an Outstanding Alumni Award winner. He served as commencement speaker for the 2018 Texas Tech graduating class. He resides in Coral Springs with his wife, Elizabeth, and their three children, Liya, Aiden and Sloane.

All session
by Jason Jenkins