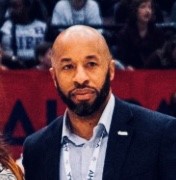 Brandon Dean is employed with the Alabama High School Athletic Association. He currently serves as the Director of the Alabama High School Athletic Directors and Coaches Association. As a former educator, coach, school administrator, and school system athletic director, he has mentored student athletes, coaches, and athletic administrators. He is a member of the National Interscholastic Athletic Administrators Association. He has been recognized as Certified Master Athletic Administrator. He is 2012 graduate of Leadership Montgomery. He is a member of Kappa Alpha Psi Fraternity, Inc. He is a two-time graduate of Alabama State University, where he earned a Bachelor of Science Degree in Physical Education in 2003 and a Master’s Degree in Educational Administration in 2006. He earned a Master’s Degree in Sports Fitness and Management from Troy University in 2019. He also earned a Education Specialist Degree from Walden University in 2016. He was named to the 50 under 50 list at Alabama State University in 2019. While at Alabama State, he was a four-year starter on the baseball team and was named team Most Valuable Player in 2003. He is the proud father of one daughter, Madison.

All session
by Brandon Dean